I have always been a huge fan of crossovers.  When I first saw Fred Flintstone and George Jetson together my diaper filled with bricks.  Seeing worlds collide and interact is amazing.  Needn’t look further than the Avengers to see how it’s a money making endeavor.  But, with film and TV these events are well planned.  The upcoming Simpsons/Family Guy crossover will have been 2 years in the making by time of release. 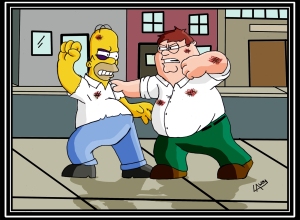 There is one medium that can deliver a complete and utter unplannedness of crossover.  That can give us a point in time when 2 completely random bodies touch.  YouTube.  Back in April of 2011, HugoSpins met Catchme1955.

The HugoSpins page stars Hugo Topaz, a disbarred lawyer who spends his newly gained free time spinning his cares and calories away (performance art?).  Catchme1955 is a page consisting of an eloquent balance of random occurrences in the page owner’s life (Jello Wrestling at his local bar) and favorited clips from his most watched TV shows (a lot of Married With Children).

One special day, Hugo decided to go spinning down main street.  A risky choice considering he usually crashes to the ground after a few minutes from dizziness.  Below is the video, the main point of interest occurs between 1:45 and 3:30.

That same day, Catchme1955 was on a scavenger hunt or something, and saw a strange man spinning.  His first instinct was to whip out a camera, record, and approach the strange man.  Video below:

Two complete strangers almost literally bumping into each other.  Now, I’ll concede that this is not the same caliber as a Jetson meeting a Flintstone, but this is what YouTube is all about.  Entertainment as a social media.

This past Saturday marked my first MovieDay of 2013.  Just so everyone is caught up, a MovieDay is exactly what it sounds like.  A full day spent at the theaters jumping from one showing to the next.

Awards season is gearing up, so there are quite a bit of “good” films out right now.

For some unexplained reason, I was really looking forward to this movie.  I thought it would be a quick/cute movie filled with enough laughs to make the film passable.

QUICK REVIEW: I was wrong.  I don’t think I have ever been in a quieter theater.  After someone in the film would make a “joke” the audience was absolute silence.  You could literally hear a pin drop.  The humor seemed to be at a weird pace that killed jokes, and the plot was generic and nothing new.

There has been a lot of FaceBook buzz that made me excited for this film.  It’s the story of ‘Merica taking down Osama, how could it be that bad?  USA!!!  USA!!!  USA!!!

QUICK REVIEW: What was this movie about?  By the end of the film you’re led to feel like it was the hero’s journey, and her search to find Bin Laden.  But all she did was complain a lot until she got her way.  Ignoring the bad acting, she still didn’t actually do anything and at no point is there a reason to believe in her gut feelings over any one else’s.  You just know that she’s right.  You know they catch Bin Laden and that her hunches are correct.  But, there is never a reason as to why you should be getting behind her.

I wasn’t too excited for this film when hype started to get big around it, but my brother saw it and absolutely loved it.

QUICK REVIEW: Hate to use such an easy word, but this film was AMAZING!  First movie I didn’t hate Russell Crowe in.  It was a real pleasure seeing Helena Bonham Carter in a movie not directed by Tim Burton.  Also, she makes a ten times better wife to Sacha Baron Cohen than she ever will to Johnny Depp.

I was very interested in seeing this movie, but did no research beforehand, so I got super intrigued when the opening credits revealed that it was written by Matt Damon and John Krasinski.

QUICK REVIEW:  Not too shabby.  Had opposing characters, either of which you could really get behind.  It showed two reasonable explanations for being on opposite sides of a heated debate.  My only qualm is that stakes didn’t seem high enough.  Didn’t really care what the heros would gain or lose over the outcome.