SAN FRANCISCO — Consumers will finally get the opportunity to own and experience WonkaVision, an interactive television that lets viewers physically handle media and entertainment.  The device will retail between $799 & $999.

Company Chairman Charlie Bucket, speaking at the company’s annual WonkaWorld Expo, called the technology (which will be available by spring 2014) a “dream come true” and claimed it has been in development since before he was involved with the company. 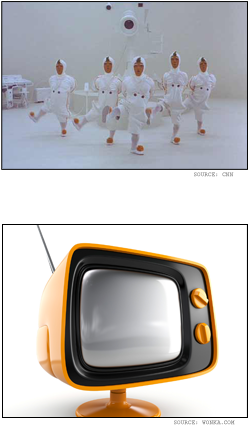 “The dream and commitment that this company was founded upon lives on with WonkaVision,” Bucket said.  “Using the dreams of the old with the technology of the new will only propel the abilities of the next generation.”

Though the company is still a cornerstone in the candy world, the brand shifted focus back in 2003 after the death of CEO/Founder William “Willy” Wonka.

“With our hands in as many candy jars (pun intended) as possible,” Bucket explained back in 2003, “we can spread the joy and happiness of Wonka to a bigger and more demanding public.”

The device can best be described as a television.  From afar it looks like a tubed tv from the 70’s with a retro look and an all white color.  All of its functions are controlled by touch screens on both the back and side.

Using cell towers with a Verizon Wireless signal WonkaVision can show Time Warner Cable customers various packages they already offer on regular TV cable packages.  Satellite technology is used for the trademark WonkaVision.  Where an object is transmitted physically into your TV.

A demonstration at Wednesday’s WonkaWorld Expo left many breathless, leading some to exclaim, “technology has finally caught up with the wildest dreams of man.”

“This is a day Willy himself was waiting his whole life for.”  Bucket stated while the demonstration was underway.

Bucket was particularly enthusiastic about the WonkaVision’s ability to end world hunger, and was ecstatic to share that by the end of the year they would release models in various colors (orange, blue or green).

Designs were shown of colors to come.  Reminiscent of Macintosh’s colored computers from the late 90’s.

Besides unveiling the groundbreaking technology of WonkaVision, the company also revealed a new line of Wonka Bars with Caramel Unfused Pretzel Bits.